I could tell you all about how we spent yesterday afternoon on the Hop On, Hop Off bus and saw lots of the city from our perch atop the vehicle, but you’ll probably enjoy what happened after we got home a lot more.

Suzette arrived this afternoon and had dinner going when we got home around 7:00. After some tasty tacos, because we’re from Texas after all and can’t go too long without our life’s blood, the moms settled downstairs and the girls up, to hang and chat. The calm couldn’t last forever, even with everyone full of tacos! One group of girls was locked the other’s our of their room and the struggle began.

Two girls and three moms out.

You see where this is going…

The house has “transoms” or really just holes cut in the wall above two of the bedroom doors so there was a perfect window for attack. When it was clear the girls were not coming out without a fight, in went the first pillow through the hole—possibly thrown by me a mother who was balanced on the arm of the couch. That inspired shrieks from within and cackles on our side.

When the pillow proved to be too much of a weapon and we feared broken furniture, a water bottle was employed to sprinkle the girls through the opening. Still not budging and claiming victory when the sprinkles ended,  I we let the other girls bomb them with big marshmallows. The first one came back almost immediately, through the window and all the way across the room into the trashcan. I figure our resident softball star threw that perfect pitch.  Five minutes of full on marshmallow war and we were all bent over with laughter, trying to catch out breaths when suddenly the other three mothers came storming up the stairs.

The look on their faces shouted, “WTH is going on?”

“They don’t think we know anything about this, but we sure do,” a mom was laughing and strutting as the mothers who had just appeared on the scene looked on in horror, preparing to bring down the law.  We breathlessly explained we’d actually started the craziness but that it was time for the door to be opened.  After a few words through the keyhole, the residents emerged and we spent the next few minutes picking up various projectiles.  Then the girls cleaned the dinner dishes–the whole reason they’d locked themselves in the room in the first place, lol. 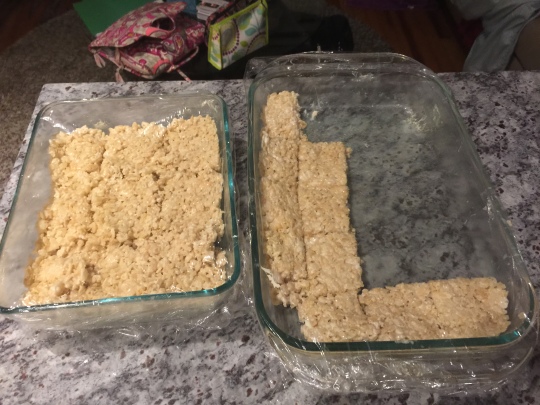